Taken from Menendez for Senate

“Throughout my career I’ve been proud to stand with nurses, hospital staff and medical professionals who serve on the front lines of our health care system every single day,” said Sen. Menendez.  “We know exactly what Republicans are going to do if they maintain power this November. They’re coming for our health care.  Phase two of their plan is to use the debt they created with their trillion-dollar corporate tax cuts as an excuse to cut Medicare, Medicaid, and Social Security.  And they are going to continue working with Donald Trump to dismantle the Affordable Care Act that I worked so hard to pass.  A greedy, drug company CEO like Bob Hugin would just be another vote for Trump to take away your health care.  The stakes in this election couldn’t be higher.” 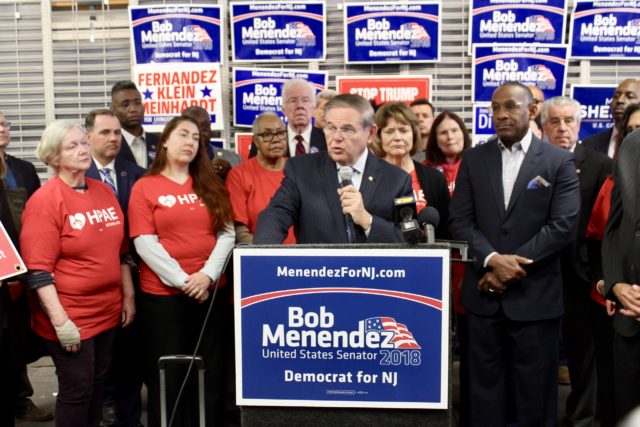 Republican Bob Hugin, who made his fortune ripping off cancer patients, donated hundreds of thousands of dollars to elect Donald Trump and gave millions to right-wing candidates and causes, like Paul Ryan, Mitch McConnell, and extreme-right Heritage Foundation who have made it their mission to repeal the Affordable Care Act (ACA).  Hugin was an early supporter of Trump’s plan to overhaul the health care system, which would have kicked millions of Americans off their insurance.

“Senator Bob Menendez has consistently been there for us, supporting nurses, health professionals and most importantly patients,”said Ann Twomey, HPAE’s founder and recently-retired president.  “Bob Menendez understands the individual’s need to have health care coverage.  He fully supports the ACA, and the need to protect Medicare, Medicaid and Social Security. A vote for Bob Hugin is a vote for Donald Trump’s bad health care policies.”

As a senior member of the Senate Finance Committee that sets national health policy, Bob Menendez has an extensive and incomparable healthcare record: 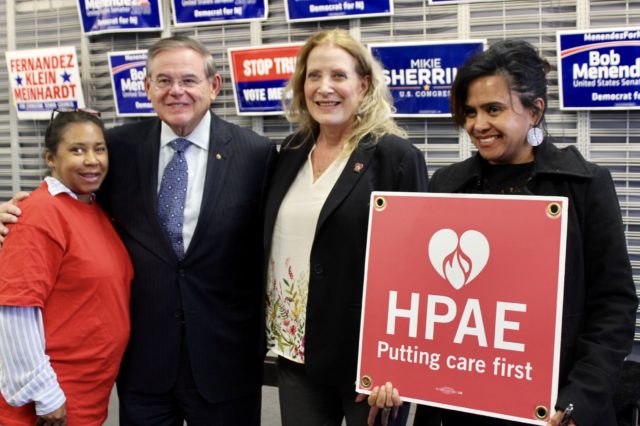 Last week, Mitch McConnell said that if Republicans retain control of the Senate they would cut Medicare, Medicaid, and Social Security in order to pay for the $2 trillion deficit created by the Trump Tax Bill that slashed taxes for the super-rich and giant corporations.  While Bob Menendez has consistently stood up for seniors who rely on Medicare and Social Security, fought against the tax bill and works to fully restore the state and local tax (SALT) deduction, Bob Hugin celebrated and benefited from the Trump Tax Scam’s passage.