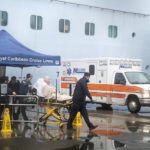 Four of the 27 Royal Caribbean passengers screened for coronavirus after the cruise ship docked in Bayonne on Friday morning were sent to hospitals for further evaluation, New Jersey Gov. Phil Murphy said.

The other 23 were cleared and permitted to disembark from the Anthem of the Seas along with the ship’s other passengers, who said they were unaware of the coronavirus concerns until being alerted by news reports.

“Personnel from the U.S. Centers for Disease Control and Prevention boarded a cruise ship docked in Bayonne this morning and screened 27 passengers who recently traveled from mainland China,” Murphy said in statement. “After being assessed by the CDC, 23 of those passengers were cleared and four individuals are being evaluated at an area hospital. The hospital is following proper infection control protocols while evaluating these individuals. New Jersey currently has no confirmed cases of novel coronavirus and the risk to residents remains low.”

Dr. Robert Harvey, a passenger on the cruise from Barnegat, said he didn’t learn about the screening of the passengers until Friday morning.

“I think someone was listening to television news and they told us about it while we were eating breakfast,” Harvey said, after disembarking at the Cape Liberty Cruise Port. “It didn’t bother me. It’s a minor thing when compared to the flu and all the deaths (from that).”

Harvey said the ship was constantly being cleaned during the cruise.

“They scrubbed that ship constantly,” he said. “I felt very safe the whole time.”

Four passengers from Canada were split about whether they were concerned about the coronavirus.

“We knew nothing,” said Ron Newelo. “We saw it on TV. They (the ship’s crew) were always careful. There’s not much you can do when you’re in the ocean.”

A man from Pennsylvania who asked not to be identified said the news was a “complete surprise” to him.“

“We didn’t know anyone was sick, we didn’t see anyone who was sick,” he said.