By Joshua Rosario | The Jersey Journal 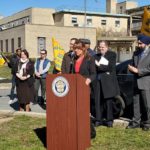 Elected officials from Hudson County say RWJBarnabas and CarePoint Health have come to an agreement on the sale of two hospitals in Jersey City and Hoboken, but the owner of a North Jersey nursing home chain is blocking the transaction.

Eisenreich, the owner of the Alaris Health network of nursing homes, owns a 25% stake in both hospitals. He also owns 70% of the HUMC property and 25% of the Christ Hospital property through operating companies.

“We feel that we are at a point now that we waited long enough,” Fulop said during a press conference outside an Alaris facility in Jersey City. “It seems Barnabas and CarePoint have come to an agreement and the last obstacle is the landlord Alaris, who is holding up the deal.

“We are calling on Alaris to stop putting greed in front of a solution and their greed is ultimately, putting tens of thousands of people’s health at risk here in Hudson County,” Fulop added.

A spokesman for SB Hoboken Propco, the limited liability company that owns the HUMC land, said the entity would welcome RWJBarnabas as a tenant.

“To ensure that this vital institution stays as an acute care hospital, SB Hoboken Propco, LLC has offered to extend the current lease, which began in 2011, until 2035 under the exact same terms and conditions, which would also include a right to purchase the real estate at the lease expiration. It should be plainly obvious that we are not impeding any transaction or making unreasonable demands of any kind.”

Eisenreich also owns 100% of the Bayonne Medical Center land. The hospital is not part of the negotiations between RWJBarnabas and CarePoint.

Hudson County’s elected officials got involved in the hospital negotiations after talks between RWJBarnabas and CarePoint broke down last month. Those negotiations have been revived, but the immediate future of CarePoint’s three hospitals is cloudy. At least 45 corporate employees of CarePoint received layoff notices last week.

Fulop said RWJBarnabas is looking to acquire HUMC land and facility, but that Eisenreich is seeking about $300 million for the property alone, which was sold for $50 million last year.