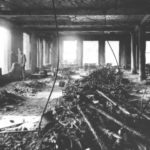 This Friday marks the 111th anniversary of the Triangle Shirtwaist Fire in lower Manhattan that killed 146 mostly young immigrant female garment workers who found themselves trapped because the factory owners had locked exits, according to some accounts, to keep out union organizers.

As in years past, labor unions and their supporters will mark the solemn occasion of those deaths on the job. Yet, this year they will also be reflecting on the ongoing workplace safety risks revealed by the COVID pandemic that took the lives of thousands upon thousands of workers.

We have no idea  how many healthcare workers, first responders and other  essential workers died to keep out state and our nation functioning.  Even now, as an untold number deal with the potentially disabling consequences of long haul COVID, there’s little stomach in Washington to investigate just how the government’s handling of the mass death event made it worse. But that doesn’t relieve us of the moral obligation of trying to find out.

HAVE THE COURAGE TO RECALL

History can come alive and speak to us in the present if we have the persistence and passion to keep rediscovering it. This would be essential especially if in reanimating the past we can learn the lessons from the horrific tragedies we often tend to want to keep buried with the dead. This is particularly the case when the hard truths are inconvenient because they impede commerce.

A case in point would be the work done by   High Street factory fire [now MLK Boulevard] that left 26 female garment workers dead that had slipped out of our collective consciousness.

The fire started after a container of gasoline spilled a floor below where the Wolf Muslin Undergarment Company was located. “Most of the victims jumped to their deaths, some gruesomely impaled on a spike metal fence,” reported the New York Times in a detailed account of Sterling’s probe, which determined that the women who died ranged in age from 16 to 59 and that three of the women, Minnie, Tillie, and Dora Gottlieb, were 19, 21, and 29-years-old when they died.

The horrific blaze on Nov. 26, 1910, not far from Newark’s Broad Street train station, preceded by just four months the mass casualty fire at the Triangle Shirtwaist Factory that had five times the death toll.  Both fires brought increased scrutiny to the poor working conditions millions of Americans were forced to endure in an economy where capital interests had all the leverage and workers were told they were just lucky to have a job.>

In 2010, on the hundredth anniversary of the Newark fire, Sterling organized a commemoration of the “deadliest incident of its kind in the city history” that happened as 100 female garment workers were “making muslin nightgowns on the top floor of a Civil War era brick building in time for the Christmas rush.”

In a moving YouTube interview from 2013, Sterling said the High Street blaze “historic significance had been lost in Newark and that people weren’t really aware of it and didn’t know what happened on this site. This is a spot that is a prime viewing are in Newark. People come by this site by the thousands every day.”

In the extensive interview, Sterling said that while the fire dominated local and even national media attention, the official Coroner’s Inquest found that “there was no culpability here, no one was to blame—that this particular incident was an accident and misadventure that’s the official reason given for the loss of these lives…No one was ever held to account.”

Yet, ironically, Sterling recounts that at New York City’s official inquiry of the lower Manhattan fire four months later, the panel members were “very interested” to know why the Newark conflagration had not served as a call to action in a city were the exact same conditions were common place.

These women were paid dollars a week and worked at least 12 hours a day, seven days a week.

Many of the Triangle workers had to also jump several stories to their deaths because the factory owners, who were staunchly anti-union, had operated the site with so little access to exits. The Triangle owners resisted signing a union contract, unlike other garment factory owners who settled with the garment workers after their 1909 general strike that shut down the industry in New York City when 20,000 garment workers, mostly women, took to the streets.

The owners of the Triangle garment factory, Max Blanck and Issac Harris—-also known as the “Shirtwaist Kings” —were acquitted of manslaughter. Yet, they were forever condemned in the court of public opinion, which was informed by the disclosure that they had previously had fires at that Triangle site and that their Diamond Waist Company plant they had also burned twice before.

The gruesome 1911 mass casualty blaze, with its long list of victims, not long after the Newark fire, sparked a national call for reform that led to improved workplace fire protection standards and wage and hour regulations. So far, during the pandemic, except for the respectful memorial cameos offered by Gov. Murphy, we have no accurate accounting of the awful toll of COVID on essential workers and their families in our state nor across the country.

REFLECTING ON TRIANGLE IN THE AGE OF COVID

“It’s been well over a century since the Triangle Shirtwaist tragedy -which kicked off the current labor movement and helped establish modern-day workplaces safety standards,” wrote Fran Ehret, NJ CWA’s executive director wrote to InsiderNJ. “But, as we’ve seen far too often over these many years, we must continue the fight for worker protection. The COVID pandemic shows in crystal clear terms how we much we must remain ever-vigilant when it comes to issues of safety, wages and working conditions. Just as lasting, positive change came from the ashes of the Triangle Shirtwaist Factory fire, I sincerely hope we see more care and protection for workers as society begins to emerge from the past two difficult years.”

“Nurses and healthcare workers are most often women and people of color who faced the greatest challenges of their life over the last two years,” wrote Debbie White, president of HPAE, New Jersey’s largest union of registered nurses and healthcare professionals.   “The COVID-19 pandemic  exposed workers to a highly infectious disease and far too many became ill and some even  died. As a result, many were traumatized and have left the workforce, exacerbating an already existing staffing shortage. We must put in place much needed workplace reforms, including improved benefits, increased compensation, and better safety protocols to recruit and retain our healthcare workforce.”

John Samuelsen, the International president of the Transport Workers Union, which represents several thousand New Jersey workers in the airline, transit and railroad sectors, said that the evolving COVID health crisis faced by front line workers very much resembled what workers experienced in the aftermath of the 9/11 WTC attack and cleanup when the U.S. EPA represented the air in lower Manhattan was safe to breathe.

“We are already seeing long haul COVID health issues in this workforce and while some bosses think it’s imaginary let me assure it is not,” Samuelsen said. “We are encountering problems with some doctors who will concede that anecdotally they are seeing these issues like chronic joint pain, sinus problems and even neurological issues like brain fog but they won’t make the linkage official for disability in Worker Compensation claims. This is going to require some kind of federal action.”

Samuelsen credited Gov. Phil Murphy with pushing for a Workers Compensation presumption for essential workers exposed on the job to the deadly virus, something New York State has yet to do. Yet, despite the COVID presumption unions report some employers are fighting their workers long haul COVID claims.

Back in April, the Guardian and Kaiser Health News reported that in COVID’s first year 3,600 U.S. healthcare workers  died from their occupational exposure to the virus. Two-thirds of those deaths were of people of color. NPR reported that COVID was the leading cause of death for police officers in 2021 when close to 500 officers died in the line of duty, a 55 percent spike from the year before.

Mary Anne Trasciatti is president of the Remember the Triangle Fire Coalition and the director of Labor Studies at Hofstra University. Along with Edvige Giunta, she edited Talking to the Girls: Intimate and Political Essays on the Triangle Shirtwaist Factory Fire  that was just published by New Village Press.

“The essential workers during the COVID pandemic are the Triangle workers of today,” said Trasciatti during a phone interview. “These are the people who went to work not knowing if they would get sick with a deadly disease and in the process expose their families. And as in 1911, when immigrant workers were considered expendable, in the 21st century they are still considered expendable by some employers.”