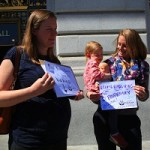 SAN FRANCISCO — San Francisco on Tuesday became the first city in the United States to approve six weeks of fully paid leave for new parents — mothers and fathers, including same-sex couples, who either bear or adopt a child.

California is already one of only a few states that offer paid parental leave, with workers receiving 55 percent of their pay for six weeks, paid for by employee-financed public disability insurance. The new law in San Francisco, passed unanimously by the city’s Board of Supervisors, mandates full pay, with the 45 percent difference being paid by employers.

Before the vote, the supervisors amended the proposal to make employees eligible only when they have worked for a company 180 days. The ordinance goes into effect on Jan. 1, 2017, for companies with more than 50 employees, and a year later for those with 20 or more workers.