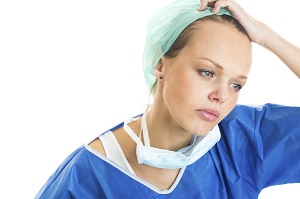 In particular, among those working adults who say they’ve experienced a great deal of stress at work in the past 12 months, the vast majority (85 percent) rate the efforts of their workplace to reduce stress as fair or poor.

“The takeaway here is that job No. 1 for U.S. employers is to reduce stress in the workplace,” said Robert J. Blendon, professor of health policy and political analysis at the Harvard Chan School, who directed the survey. It included interviews with 1,601 workers, by landline and cellphone. The margin of error is 2.9 percentage points.

About 1 in 5 working adults (22 percent) say something at their job may be harmful to their health, with chemicals and contaminants topping the list at 30 percent of those who have concerns about their workplace. We found 43 percent of construction or outdoor workers and 34 percent in medical jobs have health concerns in the workplace.
One of the obvious reasons for stress in the workplace may be overwork.

As is detailed in the poll report, working adults in our sample lived up to America’s reputation for being workaholics, with almost two-thirds of them saying they often or sometimes work overtime or on the weekends. About 1 in 5 say they work 50 or more hours each week in their main job.

Of course, taking breaks and vacations may help relieve stress. But our survey found that even among those who get paid vacations days, less than half use all or most of the days they earned in the past year. And when they do take vacation, 43 percent of high-pay workers say they often or sometimes work on vacation, with 28 percent of average pay workers and 18 percent of low-pay workers saying the same.

Why do Americans work so much? A majority (56 percent) of people working 50-plus hours a week in their main job say they do so because “it’s important for their career to work longer hours.” Half (50 percent) say they do so because they “enjoy it,” and 37 percent say they “need the money.”
These responses may be reflected somewhat in the chart below, where higher-paid workers more frequently say they work 50-plus hours, versus lower-pay workers.

It’s a similar story when it comes to sick leave. A majority of workers who get paid sick days and who did not use them all (73 percent) say they weren’t sick enough to use all of their days. More than one-third (37 percent) say a major reason why they didn’t take all their sick days is that they want to save them for another time, while 28 percent say there wouldn’t be enough people to cover their work.

Twenty percent of those who didn’t use all their sick pay say their workload made it too hard to take sick days, while another 20 percent say working more (and not taking sick leave) would help them get ahead at work.

Does reluctance to use paid leave lead workers to go to work sick? A majority of working adults in our survey say they do just that. Of interest: Half of restaurant workers and more than half of workers in medical jobs say they still go to work always or most of the time when they have a cold or the flu.

But the connection between paid leave and going to work is fuzzy. Laura Brown, who studies the issue at the Centers for Disease Control and Prevention, tells NPR’s Rae Ellen Bichell that their studies don’t show a strong link between the two.

“Forty percent of workers did say to us that they’d worked while sick in the past because they wouldn’t get paid if they didn’t work,” she says. “But when we look at the data statistically, that doesn’t really seem to be a large driving factor in whether or not people actually work when they’re sick.”

Leaving their coworkers short-staffed was a more likely reason for going to work while sick, she says.

In one of the first stories in our series, “The Workplace and Your Health,” we will look at the issue of juggling medical care with work in more depth, and how the lack of paid leave can lead to more medical problems. In another story, we’ll hear more about the stress that people with disabilities experience at work. Over 6 in 10 (62 percent), say their job has a bad impact on their stress level, compared with 41 percent of workers without disabilities.

And while shift workers (54 percent) are more likely than day workers (38 percent) to say they face danger, a significant proportion of shift workers say they do so because it is better for their lifestyle (39 percent) and/or it makes it easier to care for the family (38 percent). Half say better pay associated with shift work is the reason they do it.
But it may be that the workplace is getting safer overall. Among those who ever face potentially dangerous situations at work, almost three-quarters (73 percent) believe their workplace is actively working to reduce these dangerous conditions.