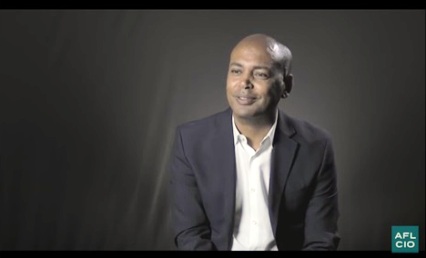 Tefere Gebre is the Executive Vice-President of the American Federation of Labor-Congress of Industrial Organizations (AFL-CIO), the national federation of unions of which HPAE is an affiliate. Tefere is also an immigrant from Ethiopia.

Here is what Tefere has to say about the U.S., the country that became his second home:

When I was 14 years old, I made the decision to leave my native homeland of Ethiopia. It was not an easy decision to make and it certainly wasn’t an easy journey. But I dared to make the decision to fight for my freedom because my life and the life of my family literally depended on it.

Immigration is one of the big issues at the heart of the upcoming presidential election. With all the hateful rhetoric being thrown around by Republican nominee Donald Trump, I thought it was important for me to open up and tell my own story about becoming a proud American.

Watch and share my video about why I’m a proud American and have just as much claim to this country as Donald Trump or anyone else.

I know first hand the importance of welcoming the brave people, who want to be free, into this country. People want to come here because they believe in what the United States of America stands for: freedom, the pursuit of happiness, and justice for all people.

Donald Trump says he alone can solve all of our problems. But that’s not how America works. In America, we find strength in each other’s differences and work together to make all of our lives better. That’s why I came to this country. And that’s why I am proud to call myself an American.