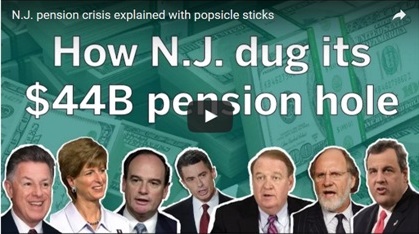 New Jersey’s distressed government worker pension system is now  the worst funded in the U.S., according to a report by Bloomberg.

The Garden State’s public pension fund has languished near the bottom, but has now dropped below Kentucky and Illinois for last place, according to the report.

Their analysis compared the states’ funding ratios, or their assets in relation to their pension debt.

As of July 1, 2015, New Jersey’s state and local pension funds have just 37.5 percent of the funding it needs to pay for future benefits. That is based on new reporting standards that require the state to project lower investment returns and had bleak consequences for the state’s estimates.