Good morning, my name is Ann Twomey, President of HPAE. Thank you, Chairman Madden and members of the Senate Labor Committee, for hearing this testimony in support of S716, the “Thomas P Canzanella 21st Century First Responders Protection Act.”

On behalf of the 13,000 nurses and health professionals represented by HPAE, our union supports this legislation which serves to ensure that Workers Compensation coverage for First Responders – including nurses and healthcare workers – is appropriately provided without long costly legal battles.

On September 11th 2001, several New Jersey hospitals received patients, most notably University Hospital, a Level One Trauma Center. HPAE nurses were part of the response to this emergency situation, in the Emergency Room providing direct patient care to the victims and to many of the first responders who were injured during that catastrophic incident. Nurses and healthcare workers are vulnerable to exposure from chemicals or toxic substances from patients who may have not been properly decontaminated after a catastrophic event and are treated at an Emergency Room.

As both paid and volunteer First Responders, these men and women respond to catastrophic incidents, often without knowing the specific exposures they face to toxins or carcinogens. Many of the dangerous substances or toxins First Responders come in contact with can cause serious, life-long illnesses and even death. Instead of gaining coverage and protection from our workers’ compensation system, First Responders often have to fight long costly legal battles to prove the link between their exposure and subsequent illnesses, some of which can take years to present.

In October 2014 the first case of Ebola in the US was reported in Texas, while nearly 100 patients were being monitored in NJ for potential contamination. HPAE nurses working at University Hospital were treating and monitoring some of those patients who were potentially infected with Ebola. Infectious diseases are not always easily identified or diagnosed because it can take up to 21 days before symptoms appear and there is significant concern about the potential risk of infection to those exposed.

The 2012 train derailment in Paulsboro is another glaring example of how an accident can quickly expose not only first responders but the community and healthcare workers to toxic chemicals. There was a major release of the cancer causing agent vinyl chloride from a Conrail train derailment, and close to 100 people were treated at local hospitals, including at Underwood Hospital where HPAE represents 400 nurses . Paulsboro also hosts the PBF refinery, with a potential offsite impact from a Hydrofluoric Acid release to up to 3.2 million people in a 19 mile potential danger zone radius.
New Jersey, is one of the most densely populated states in the nation. As a state with a highly concentrated chemical industry, NJ should set the standard for protecting public safety workers who rush toward the catastrophe -instead of running away – to save lives. In a mass casualty event from a transportation incident or refinery leak, nurses are always on the front lines.

This bill creates a rebuttable presumption of workers’ compensation coverage for any death or disability arising from the physical or psychological impact of an injury experienced by a worker engaged in response to a terrorist attack, epidemic, or other catastrophic emergency, in which the worker is exposed to pathogens or biological toxins from biological warfare or epidemics, hazardous chemicals used in, or related to, chemical warfare, or cancer-causing radiation or radioactive substances.

Thank you for your time today, and I ask for your support of S.716, to help to recruit and retain First Responders, volunteer and paid, because they know that they and their families will be protected in the case of severe illness or harm caused in the line of duty. 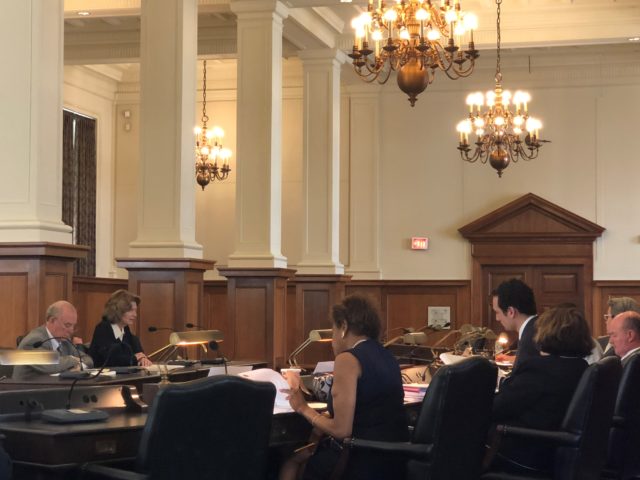