Good morning, my name is Ann Twomey, President of HPAE.  Thank you, Chairman Vitale and members of the Senate Health, Human Services and Senior Citizens Committee, for hearing this testimony in support of S.1612, sponsored by Senators Stack and Gopal, which establishes minimum certified nurse aide-to-resident ratios in nursing homes.

You may not know it but when you get on an airplane the number of flight attendants on board isn’t determined by the length of the flight or the labor costs of the particular airline you’re flying; in fact, the ratio of flight attendants to passenger seats is regulated by the Federal Aviation Administration.[1]   The government doesn’t regulate that ratio in order to make sure you get your beverage promptly or you have help stowing your luggage – but because of the recognition that flight attendants serve an important safety function in an environment with considerable potential for danger.  And the recognition that in a competitive industry with a strong focus on maintaining financial viability, airlines might be tempted to improve their financial position by cutting staff at the expense of public safety.  We can’t allow that to happen.

As you know the days of small independent health care facilities is gone, as private operators have merged and consolidated into large healthcare corporations.  With any large corporation the first line item employers look to reduce is staffing, while many of many of the CEOs running these corporations are receiving upwards of $3 to 4 Million in pay and bonuses.

These large healthcare corporations are running hospitals, nursing homes, sub-acute rehabilitation centers and ambulatory care centers, all places which can be as dangerous as airplanes.  Nearly two decades ago, the Institute of Medicine estimated that nearly 100,000 people die each year as a result of preventable medical errors.[2]  They based their estimate on the number of errors that were actually reported, but in 2012, a US Department of Health and Human Services study found that only one in 7 medical errors is actually reported.[3]   In fact, the rate at which Medicare beneficiaries experience medical errors or hospital acquired infections is closer to 130,000 per month.[4]    Medical errors have become the 3rd leading cause of death in America.[5]   Healthcare facilities are dangerous places.

Currently HPAE Local 5097 representing CNAs, housekeepers and dietary staff at the Harborage, a nursing home in Hudson County, is in bargaining with the Hackensack Meridian Health System, which has taken over the facility.  Along with HPAE Local 5030 representing Nurses, Health Professionals, Technical and Service workers at Palisades Medical Center, both union locals are bargaining at the same time pushing for safe staffing limits in their contracts with Hackensack Meridian.  As they negotiate their contract I would like to share with you an experience they would have shared if they could be here, instead they are meeting with administration to find a solution to this problem.

Tasha, a CNA who works the night shift says, “Currently I work the night shift caring for as many as 22 patients during a shift.  I enjoy providing care for the elderly and disabled, a vulnerable population that requires constant attention for safe care.  As CNAs we provide care that includes bathing, changing linens, helping to move patients, feeding, assisting patients in the bathroom, keeping patients comfortable and responding to calls from patients. One might presume that the night shift has fewer assignments, but our patients’ needs are constant and often care that was not provided on a prior shift must be addressed by the night shift. “

At Wanaque Nursing and Rehabilitation Center, which is now owned by a for profit corporation, Continuum Healthcare LLC, HPAE Local 5107 members have reported that the constant occurrence of working short staffed has resulted in a high number of injuries among CNA staff, resulting in an increasing number of workers’ compensation claims.

The research and the studies have shown safe staffing levels in nursing homes and hospitals improves patient outcomes and reduces workers’ injuries.  So why is there such opposition to mandating staffing levels in the face of so much research showing its benefits?  Good question.  In the end, I would say, the fight is because hospitals and nursing homes are worried about their bottom line and want the flexibility to cut staff in the face of financial pressures.

First, if the Co-CEOs of Hackensack Meridian Health earned collectively nearly $8 Million as reported in the corporation’s 2016 IRS 990 forms, then they can afford to make cuts in other areas before cutting staffing.[6]

Second, we need to say the same thing to the hospital industry that the FAA said to the airline industry – we understand your need for financial viability but you’re going to have to find other efficiencies and other ways to balance your budget without putting the lives and welfare of New Jersey patients at risk.

The California Hospital Association put up a long and ferocious fight against the ratio law but now that ten years has passed, they’ve moved on.  The vice president of CHA was quoted in Kaiser Health News a few years ago saying “we don’t fight this issue now.  It’s the law of the state…it’s over. It’s done.” [7]

I urge you to vote in favor of S1612 today in Committee and urge you take the next step of posting S989 to establish safe staffing levels in hospitals at the next meeting of this Committee. Thank you for your time and consideration.

[2] “To Err is Human: Building a Safer Health System,” Institute of Medicine, November 1999

[3] “Hospital Incident Reporting Systems Do Not Capture Most Patient Harm,” Dept. of Health and Human Services, Office of the Inspector General, Jan 2012 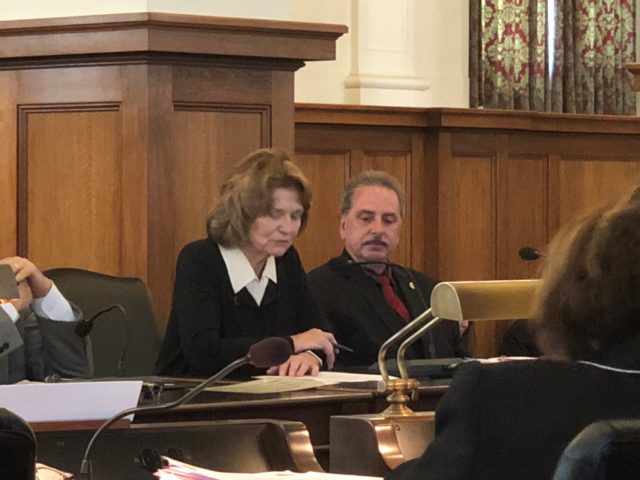