Taken from the New York Times
by Linda Greenhouse 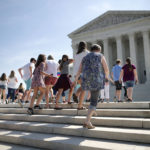 Any day now, perhaps as soon as Thursday, the Supreme Court will issue a decision that more than any other case this term will reveal to us the heart and soul of the Roberts Court at the end of Chief Justice John G. Roberts Jr.’s 14th year.

The case is Janus v. American Federation of State, County and Municipal Employees. It presents the question of whether the court will adhere to its 41-year-old precedent under which states can require public employees who object to joining a union to nonetheless pay their fair share of the union’s costs of the collective bargaining from which all employees benefit.

I’ve just made a bold claim for a case that’s not at the top of most people’s Supreme Court watch lists. What about Trump v. Hawaii, the case on the validity of the president’s Muslim travel ban, also due for a decision in the coming days? That case is extremely important, of course, but here’s the difference: There was no way the court was going to avoid a case presenting fundamental questions of presidential authority. But Janus is a case, it’s fair to say, of the Supreme Court’s own creation.

It arrived on the court’s docket a year ago at the court’s implicit invitation after three previous efforts by conservative justices to find a vehicle for overturning the old precedent had foundered. The leader of this effort, Justice Samuel A. Alito Jr., almost struck gold in January 2016 when the chief justice assigned him to write the opinion for a 5-to-4 majority in Friedrichs v. California Teachers Association. But then Justice Antonin Scalia died, leaving the court divided 4 to 4 and Justice Alito a vote short of his goal. Two months later, the Janus petition arrived.

The basic argument in Janus is that the First Amendment should be interpreted to shield workers who don’t like their union from having to associate with it or lend support to its activities. The Supreme Court rejected that argument in 1977 when it decided Abood v. Detroit Board of Education, and it has rejected analogous arguments in other compulsory-fee situations, including state bar dues for lawyers and mandatory student association fees on public campuses. The underlying argument in support of these mandatory fees is the greater common good; the specific rationale in the labor context is that the presence of free riders, who enjoy the benefits of having a union while refusing to pay for the bargaining efforts that won them, is a threat to peace in the workplace.

Related Locals:
Local 5094 Rutgers Local 5089 University Hospital Local 5135
Related Campaigns:
The Janus Decision: We All Win When We're All In