Local 5091, which represents RNs, social workers, and other professional staff at Bergen Regional Medical Center (BRMC) is putting together a strong contract campaign to achieve a good contract in upcoming negotiations. The bargaining this year is particularly important, as the 19 year management contract that Bergen County has with the current operators of BRMC is coming to an end in 2017.

Under the leadership of County Executive James Tedesco, the county has established a task force to review different options for hospital services and who will manage the facility. HPAE Secretary-Treasurer Barbara Rosen is a member of the task force. 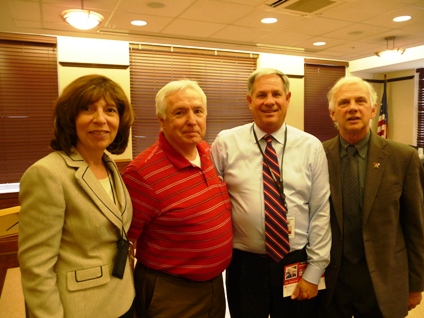 In January, the local kicked off the campaign by distributing contract surveys to the membership. Members responded enthusiastically; almost 2/3 of full-time and part-time employees provided their input about key contract issues. Just as important, over 90% of members who responded to the survey said that they were willing to participate in at least one membership activity (e.g. signing a petition) during the campaign. Members are definitely determined to be an active force in shaping the county’s contract with the new operator of the hospital.

The Contract Action Team (CAT) established by the local is the biggest team in years, with a lot of experienced unit captains/CAT members and many new ones. They helped to distribute contract surveys and are now getting members to sign a petition in support of the local’s contract priorities. So far, 1/3 of the total membership have signed and returned petitions to the CAT members.

A CAT Kickoff event was attended by nearly 40 CAT members and had very broad representation – psych, acute and LTC nurses, pharmacists, recreational therapists, occupational therapists, drug and alcohol counselors, social workers – nearly all of the major areas of the hospital were represented. CAT members were enthusiastic about negotiations and have already started to reach out to their coworkers to recruit them into becoming more active during the campaign. The local is continuing to build the CAT by reaching out to people based on their survey responses and to those members who came forward at the membership meeting to say they want to get more involved. We have CAT members from units where we haven’t had representation in years.

At the March 22nd membership meeting, there was a nearly unanimous vote in favor of the local’s contract proposals. The local had great attendance at all four meetings and actually had to turn members away who came after the vote was already closed. At the meeting, members talked about the transition from being a county-operated hospital to being managed by Solomon in 1997 and how that negatively impacted many members. But members who were at BRMC during the 2004 strike remembered how they stood together and were able to gain a decent contract settlement.

Local 5091 is planning a very robust contract campaign over the next two months (the contract expires May 31) and members are determined to achieve a good contract.