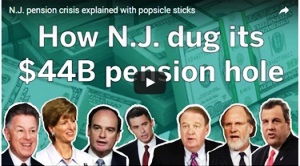 TRENTON — The New Jersey Senate has until Monday to vote to submit a proposed constitutional amendment to the fall ballot for voter approval.

Until this summer, the question was whether that ballot measure would succeed or fail. But now it’s uncertain whether it will make it to the ballot at all, as one complicated and fraught matter — public worker pensions — gets pulled into another — transportation funding.

The seemingly unrelated issues have something big in common: their price tags. The pension amendment would require the state to drum up between $600 million and $800 million in new money each year, while competing plans to replenish the Transportation Trust Fund could erase $900 million to $1.9 billion from the budget each year.

Senate President Stephen Sweeney (D-Gloucester) says the upper chamber can’t vote on the pension amendment and commit to that new spending until transportation funding is resolved.
He was booed by public workers, who earlier in the day rallied outside the Statehouse in support of the amendment, in Senate chambers Monday for adjourning without passing the pension referendum. But the Senate president said he’s looking out for the budget.

Guaranteed funding for government worker pensions and billions of dollars for transportation improvements.

The Transportation Trust Fund, which finances road, bridge and rail work across the state, expired at the end of June and will run out of money for new projects this month.

The revenue coming into the fund is needed to pay off debt.

Gov. Chris Christie in July idled $3.5 billion in road and rail work to ration the money left in the trust fund for essential projects. Industry experts estimate this shut down will cost tens of millions of dollars and thousands of jobs.

Who wants the constitutional amendment?

For public workers, this is the answer to years of broken promises and underfunding.

The amendment would make annual payments for government workers’ pensions mandatory and remove it from the annual budget appropriations process.

It’s a guarantee public workers had thought they secured under a 2011 pension reform law that committed the state to gradually paying more over seven years until it was making the full contribution recommended by actuaries. But the state Supreme Court ruled last year that the Legislature couldn’t be bound in that way and the governor couldn’t be forced to pay up.

“This constitutional amendment is in essence a do-over, an opportunity to go back to the 2011 reform law and say we are now going to uphold our end of the bargain,” Eric Richard, legislative affairs coordinator for the New Jersey AFL-CIO has said.

The proposed constitutional amendment would put an end to two decades of erratic funding, which has contributed to a $43.8 billion unfunded liability for the state portion of the pension system.

It would also force the governor to make the contribution quarterly rather than in one lump sum at the end of the year.

What’s next for the amendment?

The Senate and Assembly approved the referendum last year and needed to do it again this year to get it on the November ballot. The Assembly has already passed it. The Senate has not.

Sweeney is a prime sponsor of the measure, but he said Monday that if it doesn’t get done this year, there’s always next year.

“Sen. Sweeney make a promise to our members that the pension amendment would happen this year,” he said in a statement. “We will not accept anything less than the amendment he promised this year.”

Sweeney said he wants to resolve the transportation funding crisis before committing the budget to a major annual expense.

Though both he and the governor would finance transportation projects with a 23-cent increase in the tax on gasoline sold in New Jersey, they disagree on a complete tax package.

Sweeney said the Legislature’s proposed tax cuts stretch the budget as far as it will go. But if the construction shut down drags on, a compromise with the governor could dig deeper into the treasury and jeopardize funding for the pension amendment, he said.

What does Sweeney want?

His plan to fund the Transportation trust fund would cost the state about $900 million a year once fully phased in. He said that leaves enough room to make the pension contributions.

Senate and Assembly Democratic leaders have agreed on a plan to cut the estate tax over several years, increase the Earned Income Tax Credit, raise the retirement income tax exclusion, create a tax deduction for gas tax spending and a tax break for veterans.

The tax breaks are tailored at recruiting Republican lawmakers to vote with Democrats and potentially override the governor.

According to the nonpartisan Office of Legislative Services, the governor’s proposal would cost $1.9 billion a year by 2022.

Christie proposes to cushion the gas tax blow to drivers with a rollback in the sales tax from 7 cents to 6 cents over two years and an increase in the retirement income tax exclusion.

He has said only a broad-based tax cut like the sales tax amounts to “tax fairness.”

The Assembly agreed to this plan at the end of June, but Speaker Vincent Prieto (D-Hudson) since struck a deal with Sweeney.