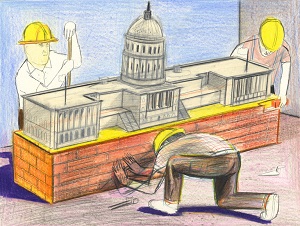 The white working-class men who are planning to vote for Donald J. Trump this November have been called many things: xenophobic, racist, misogynist, dangerously naïve. But even if those descriptions are true, it doesn’t mean these men were fated to be Trump supporters. Recent research in social science and history suggests that they might have been out front in the fight against Mr. Trump — if only the American labor movement weren’t a shell of its former self.

When we think about unions, what typically come to mind are interest groups concerned with wages, benefits and working conditions. Scholars, however, have shown what everyone in politics knows instinctively: Unions are also political organizations that, under the right circumstances, can powerfully channel the working-class vote.

A classic study on this subject was done by the sociologist Seymour Martin Lipset. In a 1959 paper, he demonstrated that while the working class in most countries favors economic liberalism, it also displays an authoritarian streak. Using evidence from surveys, Mr. Lipset found blue-collar workers to be less committed to democratic norms like tolerance for political opponents, preference for rational argumentation over charismatic appeals and support for the rights of ethnic and racial minorities.

These tendencies, he claimed, were a function of lower levels of education and the isolation of many workers (for example, coal miners) from people who were different from them. Authoritarian attitudes also owed something to the work itself. Controversially, he suggested that manual work was at odds with the abstract thinking required to appreciate complex, pluralistic solutions to political problems.

Yet in Mr. Lipset’s view unions had the potential to counter such tendencies. If infused with a democratic spirit — organized and run in a non-autocratic fashion with an eye to the greater good — a labor union might inculcate civic virtues in its members, pushing them to think and vote in a more enlightened way.

Though contemporary research has called aspects of Mr. Lipset’s thesis into question (it turns out that position in the class structure per se does less to account for tolerance than does education), his broader insight — that how the working class throws its political weight around depends on what’s happening in the labor movement — finds strong support.

For instance, the sociologist Jake Rosenfeld, analyzing data from the Current Population Survey, reports in a recent book that unions are remarkably effective at getting people to the polls. The effects of union membership on voter turnout are especially large, he finds, for workers with only a high school education, who might otherwise feel marginalized politically.

Unions can also push their members to overcome prejudices bearing on politics. In a paper published this year the historian Timothy Minchin argues that backing from the A.F.L.-C.I.O. was vital to the election of Barack Obama in 2008. According to Mr. Minchin, Mr. Obama was a tough sell to white union members with less progressive racial attitudes. But seeing the potential in Mr. Obama, who was a former community organizer, Richard Trumka, then the secretary-treasurer of the A.F.L.-C.I.O., turned on the charm — and opened his organization’s wallet. Through speeches, meetings and mass mailings he pressed Mr. Obama’s case.

In Europe, as in the United States, working-class men are a key constituency for the far-right political parties that are now ascendant. Yet ina study published last month of 16 European nations, the political scientists Christoph Arndt and Line Rennwald found that union membership helps inoculate workers against the far right’s message. While the far right has been able to gain ground even in countries like Sweden where unionization rates are high, in general employees covered by collective bargaining agreements feel less threatened by the social changes that agitate far-right ideologues. (It is not an accident of history that Hitler abolished German trade unions as part of his consolidation of power, or that farmers and small business owners were more sympathetic to the Nazi cause than were industrial workers reared on unionism.)

IF unions can steer workers in democratic directions, why haven’t they been able to tamp down the appeal of Mr. Trump? Unions have in fact been heavily involved in the anti-Trump campaign. But there are limits to what they can do. After all, the A.F.L.-C.I.O.’s successes on behalf of Mr. Obama were limited primarily to unionized voters. And unions have been profoundly weakened by changes in the American economic structure, and by decades of assaults against them by the Republican Party.

In the post-World War II era, one in three American workers belonged to a union; now it’s down to one in 10. In terms of representing the traditional working class, the number is even smaller, since a large and growing share of union members consists of public sector employees with college degrees (like teachers).

Union decline has left the working class politically and economically vulnerable, and it’s this vulnerability Mr. Trump has been able to exploit. (For obvious reasons, working-class African-Americans and Latinos are antipathetic.) If unions had anything like their former influence, how many workers would buy the empty economic promises Mr. Trump is making — a man whose recently announced economic advisory team is made up largely of fellow billionaires, and who has said that hourly wages are too high?

There’s a lesson here for the future. American unions have a checkered history and are far from perfect. But as an institution, unions are an essential bulwark for democracy. We’ve allowed them to wither at our peril.