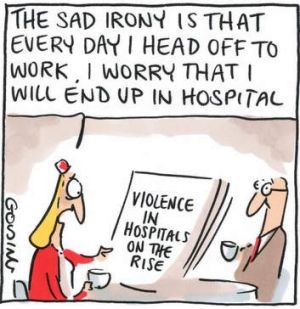 C4 became a battlefield last week when several staff members were injured by an aggressive patient.  One of the nurses sustained a head and eye injury and a resulting debilitating headache.  The physical injury was bad enough, but add to that the emotional trauma of being hit in the face hard enough to cause a huge lump and a black eye.  It was very traumatic for the nurse and disturbing to everyone on the unit

Following the attack, the nurse filed a police report which involved several hours of her time and trips to two different police stations.   A week after the incident the patient was still on the unit.   Co-workers questioned why he had not been arrested.  When we investigated the process  we discovered that once the report is made, it is in the hands of the legal system.  After the report  is taken by the detectives it is forwarded to the DACU, District Attorney’s Charging Unit, where the determination is made whether or not to file charges and arrest the perpetrator.  Deciding factors would include the extent of injury and the circumstances surrounding the incident. The DA’s office would also take into account information obtained from the patient’s physician when making the decision how to proceed with the case. They might decide not to press charges based on diagnosis, mental status, etc.   Even in cases where assaultive patients at Episcopal have been charged and arrested, there is no guarantee that justice will prevail.  More than one felon has been released by the courts.

The decision of whether or not to press charges rests with the person who was attacked.  The Hospital cannot file a complaint on your behalf, nor will the Hospital recommend that you file, or not file, a complaint.  But it is important that if you do go to the police department to file a report , that you take a copy of the PA statute,  Title 18, Crimes and Offenses, which  specifies that an assault on a healthcare worker is a felony. Click here for the statute.