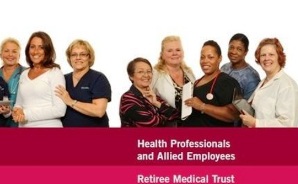 At their meeting on November 16th, the HPAE State Executive Council appointed two union trustees to the HPAE Retiree Medical Trust for 2017.

Click here for the job responsibilities of the union trustees.

HPAE Staff Rep/Education Coordinator Mike Slott was reappointed for another one year term.

Local 5118 Vice President Jackie Franchetti was appointed as the other union trustee. Jackie is taking over for Local 5105 member Joan Johnson, who has served as a trustee with Mike since the Trust began operations in Fall 2006.

We thank Joan for her commitment to building a viable, strong retiree medical plan for HPAE members. From the very beginning, she played a crucial role in the success of the Trust.