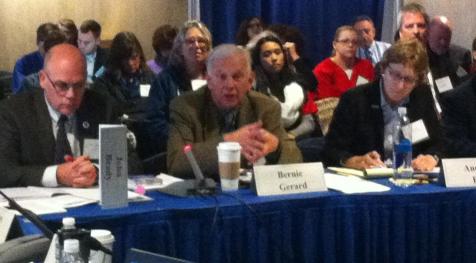 Bernie Gerard speaking on Dec. 10, 2017 at the OSHA public meeting.

HPAE Vice President Bernie Gerard and Local 5089 Grievance Chair Banita Herndon spoke at a public meeting sponsored by the Occupational Safety and Health Administration (OSHA) to support the need for an OSHA standard to prevent workplace violence in healthcare and social assistance. The meeting provided HPAE and other unions with an opportunity for members to tell their personal experiences with workplace violence, as well as allowing for discussion among groups interested in these standards.

Michaels said that Occupational Safety and Health Administration officials are “shocked at the high rate of workplace violence,” he said.

AFL-CIO and others, as well as National Nurses United, petitioned OSHA in July 2016 for a standard that would require healthcare employers to create violence prevention programs, provide training and investigations and forbid retaliation if workers seek law enforcement help during violent incidents, among other provisions.

On December 7, OSHA published a Request for Information (RFI) to solicit information on a potential standard to prevent workplace violence in healthcare and social assistance settings. The RFI also solicits more detailed information on topics such as effective strategies for reducing incidents of violence in various healthcare and social assistance settings. Comments and materials may be submitted electronically to www.regulations.gov, the Federal eRulemaking Portal, or via mail, facsimile or hand delivery. The submission deadline is April 6, 2017.