HPAE held its fourth annual Bargaining Conference on Tuesday at the Rutgers University Labor Education Center in New Brunswick, NJ. Over 100 HPAE leaders, activists, and staff came together to examine the challenges that we face and identify the bargaining standards and public policy goals our union needs to fight for. 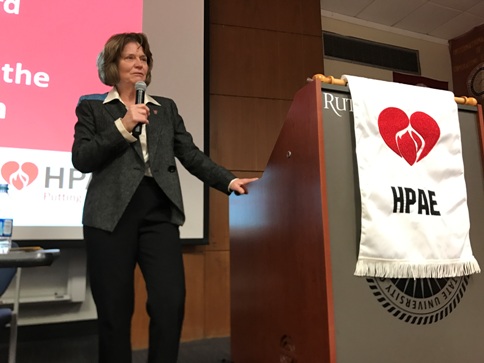 HPAE President Ann Twomey and HPAE General Counsel Emma Rebhorn opened the conference with presentations on the challenges we face from the new Trump administration. Ann focused on the negative consequences for healthcare workers, patients, hospitals, and the community of repealing the Affordable Care Act (ACA) and cutbacks to Medicaid and Medicare, key objectives of President Trump and the Republican-led Congress. She urged HPAE leaders and activists to make a commitment to each other to fight back and stand together to defend our rights and benefits.

Emma explained how our legal and labor rights will be under attack due to new appointments, policies, and laws. She detailed how Trump’s Supreme Court nominee, Neal Gorsuch, has a terrible record with respect to workers’ health and safety rights. In addition, the new Secretary of Labor (Andrew Puzder is the current nominee) and new appointees to the National Labor Relations Board will undoubtedly attempt to weaken or eliminate union and workers’ rights. Finally, we face the potential for the implementation of so-called “right to work” laws in both the private and public sectors.

With the challenges before us clearly laid out, we spent the rest of the afternoon discussing key issues and strategies. Maura Collinsgru, from New Jersey Citizen Action, discussed how the repeal of the ACA and the conversion of Medicaid in to a “block grant” program will put patients and hospital finances at risk. A second workshop, led by Dan Fatton from the Work Environment Council, examined the impact of growing income inequality in the U.S. on public services, workers’ rights, and our communities. He also discussed the strategies and actions which can reduce inequality and create an economy that works for all of us. The need to involve HPAE members in a contract campaign to win good contracts was the focus of the third workshop, facilitated by HPAE Staff Rep Mike Slott. 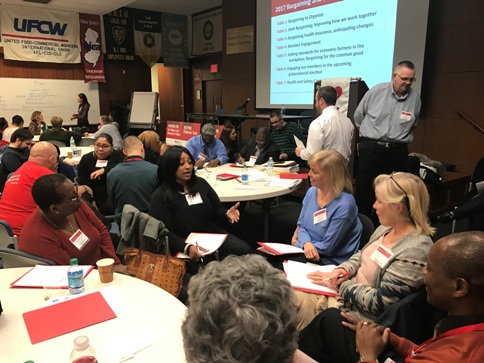 Following the workshops, we broke up into small groups for round table discussions of bargaining priorities and public policy goals, based on our Strategic Plan for 2017-2018. Topics included Bargaining to Organize, Joint Bargaining, Bargaining Health Insurance, Member Engagement, Bargaining for the Common Good, Engaging Our Members in the Upcoming NJ Gubernatorial Election, and Building Strong Health and Safety Committees.

After the conference was over, members of the State Executive Council and the Committee on Political Education (COPE) interviewed Phil Murphy, who is running for New Jersey Governor as a Democrat. Murphy responded to questions regarding his positions on HPAE legislative priorities and his vision for improving the New Jersey economy and workers’ rights. 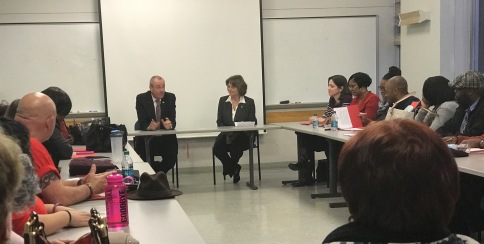