On the eve of a Supreme Court case that will have long lasting affects on the union movement in America, thousand rallied across the country to support workers and unions.  In Philadelphia at Thomas Paine Plaza across from City Hall over a thousand union members and community activists came together to celebrate Working People’s Day of Action.  Pat Eiding, President of the Philadelphia AFL-CIO emceed the event.  Pat is a long time union man who has worked tirelessly to unite the unions in the city and surrounding counties to advocate  for working people.

Our mayor, Jim Kenny, was there with a message of continued union support.  Gov. Tom Wofe could not attend, but sent a video promising to continue to oppose the Republican forces in Harrisburg who are attacking union with ridiculous “right to work” laws.  Richard Trumka, President of the AFL-CIO and Mary Kay Henry, President of SEIU, one of the largest unions in America, highlighted the national support for this movement and the significance of the Janus case.

Arguments for the Janus case will be heard by the US Supreme Court on Monday, February 26, 2018.   Mark Janus works in a facility that is represent by a union (AFSME).   He has chosen not to be a union member, but as a member of the bargaining unit he is entitled to the same protections as a union member, including the same wages, benefits and representation in a disciplinary action.  The court has ruled in the past that these benefits justify the designation of a “fair share” payer and that anyone who benefits from union representation will pay union dues.

This movement to strike at the heart of the unions is not the work of any individual, but the right wing extremists  who long for days past when workers had no say in the conditions of their employment and  when every employee was an at will employee.  There goal, pure and simple, is to get rid of unions.  We can’t let that happen.

At the rally we carried signs that said:  American Needs Unions.  We Won’t Go Back.

Regardless of the results of the Janus case, we won’t go back.  We will stay strong and fight to grow the union movement in our country. 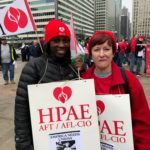 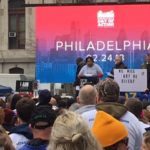 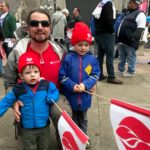