New Brunswick…Calling for fair union contracts, a freeze on tuition and a $15-per-hour minimum wage on campus, more than 400 Rutgers faculty, staff and students rallied outside the Board of Governors (BOG) meeting while dozens more inside petitioned the governing body directly. Student groups and mem-bers of 23 unions representing more than 20,000 Rutgers workers whose con-tracts expire June 30 organized the protest, according to Anthropology Professor David Hughes, Vice President of the Rutgers AAUP-AFT faculty union.

“Our students deserve more opportunities for education without incurring debt, while Rutgers workers deserve real raises and security that the university can amply afford,” said Hughes. “We are committed to public education as a right and call this a ‘fight for a Rutgers we deserve.’”

Students are concerned with rising costs of education and mounting debt, according to Ahan Sikri, a sophomore studying political science and economics. Sikri joined Rutgers United Students Against Sweatshops, which is calling for a $15 minimum wage on cam-pus, including student workers. “It’s time for a revolution that serves Rutgers students of all backgrounds,” he said, referring to management’s marketing campaign of ‘Revolu-tionary Rutgers’ during its 250th Anniversary in 2016 that exposed a history of poor treatment of people of color.

Faculty and staff have many concerns as Rutgers University enters into a twenty-year master-three-way affiliation agreement with RWJ Barnabas and Rutgers Health Group, according to Tom Murphy, Research Teaching Specialist, Co-President of Health Professionals and Allied Employees (HPAE) local 5094. “We are very concerned about the precise details of the affiliation,” Murphy said. “When a public institution such as Rutgers enters into a partnership with a private company there must be over-sight or transparency, but currently there is none.”

Dr. Roger Johansen, President of the AAUP-BHSNJ medical school faculty union said he hopes Rutgers management takes the time to listen to the concerns of the community and its workers. “The prospect of members losing their jobs due to an affiliation agreement with no transparency is frightening to our members, especially those with twenty plus years of public service,” said Johansen. “We sincerely hope that Rutgers management engages with key stakeholders before rushing to transform the delivery of healthcare in New Jersey.”

Lucye Millerand, President of the Rutgers administrative staff union (URA-AFT local 1766), is concerned that Rutgers management fails to include campus stakeholders in planning resulting in massive waste due to misplaced priorities. “Rutgers management is spending tens of millions on failed ventures like Big Ten football and a poorly executed Cornerstone financial technology system.” Meanwhile, she said workers in her 2,500-member union are taking home less pay than eight years ago.

“Contract bargaining has commenced for some unions, but the campus coalition has overarching concerns that must be addressed by the university’s official leadership prioritizing student and community issues, according to Deepa Kumar, Associate Professor of Media Studies, President AAUP-AFT. “We deserve a Rutgers University that is affordable, accessible and a responsible community partner. This coalition is committed to working together to create a more equitable university and we will continue to raise our voices.” 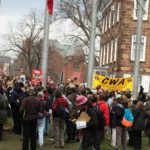 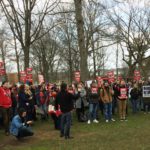 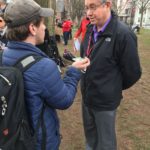 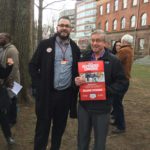 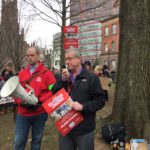