On October 1, 2019, PASNAP locals representing about 2,000  nurses, techs and professionals at Temple University Hospital rallied their members with supporters from the community and other labor organizations.  The two locals continue to negotiate with the hospital despite the fact that their contract expired on September 30, 2019.  At issue is the union’s demand for a successorship clause which would guarantee that union contracts would be recognized and honored in any merger or acquisition. The concerns are valid since their health system, which owned by Temple University, is working with a chief restructuring officer, Stuart McLea  of Alvarez & Marsal, as part of a broad effort to make it financially sustainable.

Taking over as CEO of the hospital is Michael Young, who came to the hospital in August as chief operating officer.   This group has a reputation for mergers and acquisitions and surely there last concern will be the faithful workers employed at the hospital.

This issue will have significance in our upcoming negotiations since we face the same risk of being merged or acquired by a new employer who could refuse to honor our contract.

Nate Horrell and Marcus Pressley, HPAE staff, and Richellle Kozak and Sue Clements, HPAE local 5106 came out in support of our sisters and brothers at Temple. 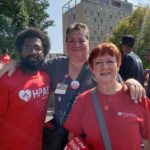 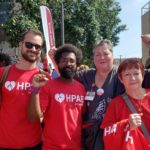