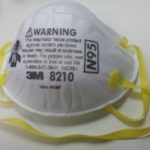 In the Covid-19 pandemic, worker health is public health. But worker safety and health is in a crisis in this pandemic. The Federal government is failing to ensure the safety and health of workers—including those most at risk, health care workers. The government has also abandoned its role in keeping all other essential workers safe—those in supermarkets, delivery, warehouses, factories, public transportation and sanitation. As the Federal government walks away from its responsibility to protect workers in this crisis, unions and worker activism are helping to fill the vacuum.

Ahuge part of the problem is the shocking shortage of protective gear – for example N95 protective masks – for our front line health care workers. Daily stories of brave doctors, nurses and emergency responders working  without the necessary protective respirators (the NIOSH approved N95s), face shields, masks and gowns, or they are reusing respirators that are supposed to be used only once.  Many are already ill, some critically. The federal government had 13 million N95 protective masks, and other protective equipment, stored in warehouses as part of the Strategic National Stockpile. But the Administration was disturbingly slow, and disorganized, in locating this protective gear – which is all controlled by the Department of Health and Human Services – and getting it out to the hospitals and cities most in need.

Making full use of our stockpile of protective equipment is an important step, but even this wouldn’t be an adequate response to the crisis. It is estimated that we will need some 300 million N95 respirators in this battle. Had the Administration used its powers under the Defense Procurement Act to get these produced four weeks ago, as we were all beginning to curtail our lives to protect the spread of Covid-19, we could have been well on our way to meeting the need for protective equipment of our front line health care workers and emergency responders.

To date, less attention has been paid to another urgent problem: the lack of action by the Occupational Safety and Health Administration (OSHA), the government agency responsible for protecting worker’s health and safety on the job. In a sharp departure from previous pandemics and crises, OSHA is not conducting any Covid-19 enforcement—even for health care workers at risk. This kind of dereliction is unprecedented. Ten years ago during the H1N1 crisis, OSHA made it clear they would conduct enforcement. Today, OSHA’s response to workers who contact the agency because they fear for their health, including health care workers, is that there is nothing the agency can do. No enforcement. One OSHA office told a nurse: this isn’t our jurisdiction. This is stunning coming from the agency where I was once a senior official.

Three weeks ago the AFL CIO sent a petition to OSHA urging the agency to issue an emergency standard to protect health care workers. Despite wide ranging support from the occupational and public health community, the agency has not acted.   There might have already been an OSHA standard in place to protect health care workers had not the Trump administration, in 2017, halted efforts that were underway during Obama Administration. The White House  and the American Hospital Association also successfully lobbied against including a provision to require OSHA to set such an emergency  standard  in the first coronavirus aid package enacted. OSHA could require hospitals to use the more protective respirators that are available (PAPRs)—they are more expensive but can be reused—but it is not doing so. Instead, the Centers for Disease Control and Prevention told doctors and nurses to use scarves if they can’t find a respirator mask, even though there is zero evidence that these would protect frontline workers.

It’s the unions and an amazing exercise of worker power and activism that have come to the rescue. Just this week, SEIU announced they found 30 million protective masks. The National Nurses Union has pushed back hard against the CDC’s new guidelines relaxing required protection for nurses and doctors taking care of infected patients. The American Federation of Teachers just published guidance for doctors and nurses on respirator use to protect themselves.