HPAE members testifed at two public hearings held yesterday to review the proposed merger of the Hackensack University Health Network and Meridian Health. While supporting the pending merger of Hackensack and Meridian, they urged the New Jersey Attorney General to set conditions protecting the rights of health care workers and the community’s access to health care services.

Assuming the merger is approved by the state, four HPAE locals will represent a total of 2300 RNs and other health care workers at four facilities in the merged system: Jersey University Medical Center, Southern Ocean Medical Center, Palisades Medical Center, and The Harborge, a nursing home.

Photo below: HPAE Local 5097 members (in red shirts) from The Harborage and HPAE Counsel Emma Rebhorn at the hearing in Hackensack, NJ:

A fifth HPAE local also has a connection with the merged system. HPAE Local 5004 represents RNs at Englewood Hospital and Medical Center. The medical center is not currently part of the merged system, but does have a clinical and academic affiliation with Hackensack. 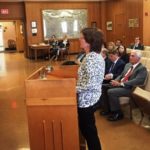 At the hearing in Hackensack, NJ yesteday afternoon, HPAE members from Palisades Medical Center, The Harborage, and Englewood Hospital and Medical Center attended. Local 5030 President Michele Burlington (Palisades) emphasized the importance of maintaining existing union contracts: “We ask the NJ Attorney General (OAG) to incorporate as a condition to this merger between Hackensack and Meridian Health Systems a requirement that all employees are retained and existing labor agreements are honored.” Local 5097 member Paula Shurn (The Harborage) also spoke about the importance of protecting workers’ jobs, services to the community, and union contracts in the merger

Read the HPAE Press Release on the Merger Hearings 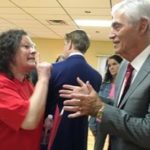 Forty HPAE members from Jersey University Medical Center (Local 5058) and Southern Ocean Medical Center (Local 5138) attended the second hearing, held in Neptune, NJ last night. In her
testimony, Local 5058 President Kendra McCann asked Meridian’s CEO John Lloyd to commit to honoring the contracts of the HPAE locals in the merged system. Lloyd agreed to do so for the Meridian locals (Jersey Shore and Southern Ocean) and to put that commitment in writing.

New Jersey Organizing Project Stands with Nurses at the Hearing

In addition to HPAE, members of the New Jersey Organizing Project were present at the Neptune hearing. A representative of the group testified about the absence of mental health services in the area after Hurricane Sandy and the continued need for care.