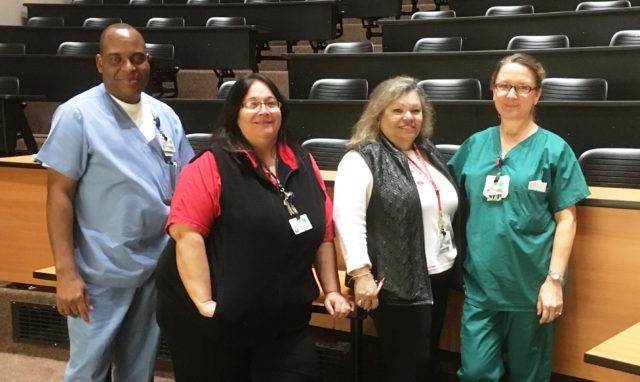 On Thursday, October 13th, after two days of voting, the members of HPAE Local 5094 voted by an overwhelming majority of 88% to ratify our new contract with University Hospital.

This is the first contract we’ve negotiated with the Hospital since becoming a standalone facility after the dissolution of UMDNJ in 2013.

We won retroactive raises, closed pay gaps through step movement, increased job security through expanded job series bumping, improved our education benefits and strengthened our grievance procedure. We were also able to significantly reduce the negative impact of many of managements’ proposals while at the same time ensuring hospital policies are consistent and rational.

We are looking forward to implementing the terms of the new agreement. We’ll share more details in the weeks to come. In the meantime, you can review the summary of the agreement and read the signed MOA at our website: www.5094hpae.org.

And, let’s not forget the 900 HPAE nurses at the Hospital who are still in negotiations. We want fair contracts for all of our HPAE co-workers.

This is your contract. It was made possible by your participation, activism, and support for the union. Hundreds of members attended meetings, signed petitions, submitted surveys, took action at board meetings and wore stickers. And, we just had one of our largest contract ratification votes to date.

Now that our negotiations are completed, we must continue to build momentum to enforce our new contract and set our sights on our next contract which will be here before we know it.

I am proud of what we have accomplished working together and I know that united, we can win.

On behalf of your negotiating committee,