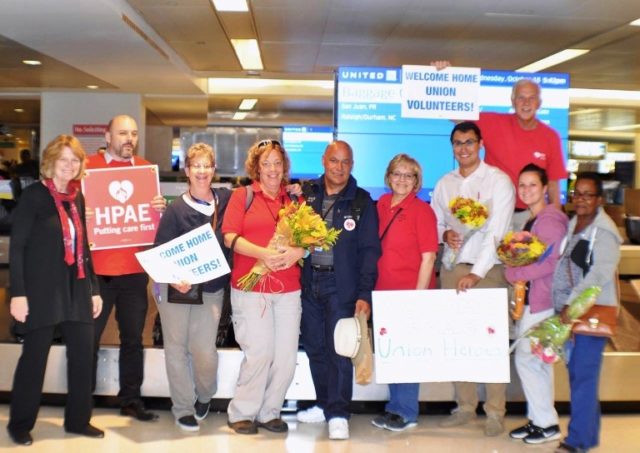 Joan Davis (4th from the left) greeted by HPAE staff and officers upon her arrival back in the U.S.

Saturday September 30, the call went out.  It was sent via email to all of the sister unions of the AFL-CIO.  Puerto Rico needs help.  The AFL-CIO is the largest federation of unions in the United States.

Several hundred union workers immediately responded to the call for help, including myself. By Monday October 1st with assistance from Terry Leone, our HPAE Staff Representative and our Chief Nursing Officer, I was released from duty by Cooper Hospital for three weeks to make my journey to San Juan Puerto Rico. It was to be a humanitarian aid mission involving union nurses from across the country, nurse practitioners, physicians, police officers, trade Unionists, including welders and many different skilled construction workers.

By Wednesday, October 4th we were on a United Airlines flight meeting each other for the first time.  Strong bonds were formed almost immediately. And the energy was palpable. Somewhere above San Juan was my first and last “oh my God” moment. What was I thinking? Was I strong enough to hack it?  Was I too old for 16 hour shifts?  In hindsight, I’m sure that I wasn’t alone.

My self-doubts passed very quickly when we landed in PR and were greeted by applause from the local community. They cried and took our hands as we made our way through the airport to the awaiting busses. It was hard to look them in the eyes and know that for so many of them, their lives had forever been changed. They waited in the airport in the hope of being one of the lucky ones to be able to leave their homes. It was heartbreaking.

United Airlines donated the flight for those leaving PR. The crew also volunteered their time. The plane was quickly refueled and filled it with hundreds of people for the return trip to the mainland. Then, there we were. It was so surreal. We were driven to Roberto Clemente baseball stadium and greeted by the Mayor of San Juan, Carmen Yuliz Cruz. There were to be speeches and press. However, we had heard that the local residents had been boxing food donations at the nearby coliseum for weeks. We went to join them. There were armed guards outside; however, we were able to move around freely as volunteers. The coliseum was loaded with pallets of food, water, diapers, baby formula and every nonperishable you can imagine! They told us that they were losing hope as all of the boxes of food were still in the coliseum.  We assured them that it would all be distributed as we brought at least seventy truck drivers with us. We packed boxes for a few hours until the local residents had to return home due to the curfew. It was an amazing time of hope and bonding for all of us.

Later that evening we split into groups by trade for updates on the conditions on the island. There were reports of widespread cases of conjunctivitis (pink eye) as well as scabies, Power remained out on the entire island and there was absolutely no clean, safe drinking water. There were also reports of communities being completely cut off in the mountain region due to collapsed bridges. Many roadways were impassible due to trees and other debris blocking the roadways and power lines were sagging or lying across the roads. We were divided into smaller groups of eight teams determined by skill set and called it a day. We were housed in the locker rooms of the stadium which were powered with generators.

Thursday morning we boarded buses and headed out to several different communities on the outskirts of San Juan. Driving to Cupey we were able to really get our first look at the devastation. There were blue tarps as far as the eye could see in place of roofs. Trees were stripped bare of all foliage and simply tossed about into homes, businesses and roads. Power lines were sagging, blocking access to trucks as well as our bus. Our driver spent a lot of time on the roof of the bus lifting power lines while another driver drove the bus. Teams were dropped off in different areas of Cupey where the Boys and Girls club were doing their best to help as many people as possible. We set up a pop up clinic staffed with either a NP or MD along with several nurses. The rest of us fanned out into the community knocking on doors and checking on elderly residents. It was so hot; every day it was in the 90s. People had no water and we found many to be dehydrated. Our NP had provided us with several teaching tools. One a treatment for dehydration, another an eye wash for pink eye, and a third was a mixture of adding drops of chlorine to water to make it safe to drink. The teaching began. Every team had translators as well as many nurses who spoke Spanish. Then a new problem emerged. Diabetes and hypertension are common problems on the island and people were unable to get their prescriptions refilled. The pharmacies did not have power either and could not access computer systems to verify whether or not a prescription could be refilled. The liaisons along with NPs were able to work out a temporary fix with the pharmacies for patients to fill prescriptions. But, it along with so many things that we did, it was temporary. This was repeated in every community we entered.  There was no food, no water and no power. Respiratory patients unable to use their nebulizer medications or CPAPs were sent to the hospital. Insulin, which must be refrigerated, was no longer good.

That night, every team took on a project with the use of pictures. The words were translated to Spanish and several hundred copies were made for distribution. Several of us headed over to the coliseum to find out if we could help by taking the boxes of food into the community the next day. We were told “it is FEMA’s food.”  FEMA’s food? Do you mean the people’s food?  No, apparently all of the food was from private donations and earmarked for specific towns. Unbelievable!

On our own, we went shopping.  There were two hour lines wrapped around Costco as well as Sam’s Club. Several people had “Go fund Me” accounts and were able to buy thousands of dollars of food and water for the community. The rest of us purchased as much as we could. The food was divided up into teams. A map was placed on the wall of the stadium and we used colored tags to mark the group who went to that town. Our team found two teamster drivers who had mini vans rented in their name and we teamed up. The vans allowed us to cover more ground as well as the freedom to visit several different communities in one day. It Worked! Every team now had a van and we were able to go all over the island.  We started on the southeast corner of the island where Maria made landfall in Yabucoa and followed the path across the island.

It is important to note that we only saw FEMA one time the whole time we were there! There were 317 of us spread out over the island. We approached them and asked if we could have some FEMA forms to take to the areas we were visiting. We could help them fill them out and bring them back to San Juan with us.  We were told that the application process needed to be filled out “on line”. We told them that there is no online, and for that matter no power!  Apparently, this is their policy.

We did this every day for two weeks and although frustrating as far as the bureaucracy this journey was without a doubt one of the most rewarding and fulfilling things that I have done in my professional career.  We did an incision and drainage of an abscess in a leg in the field using my pocket knife. My partner made a splint out of a 2×4 piece of wood cut to size by a neighbor. We saved lives. We made lifelong friends and hopefully we brought just a little bit of comfort and health to those who needed it most.

Puerto Rico still needs help! Not words or promises. Definitely not thoughts and prayers. Not only are these people Americans, they are human beings and we are letting them suffer! We had mixed feelings leaving. We all wanted to stay. However, it was necessary for us to return to tell the stories and describe the living conditions. Without electricity and clean water the death toll continues to rise!  Leptospirosis -caused by drinking contaminated water – will emerge.

The ball is in our court and what we do with it will be reflective of us, but more importantly have a direct impact on our American citizens of Puerto Rico.