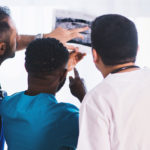 A controversial proposal to merge the two Rutgers University medical schools into a single entity spread over two cities 30 miles apart may be gaining momentum, despite concerns among some faculty and staff about the process and potential risks involved.

The Rutgers University Senate is scheduled today to consider permitting leaders at Robert Wood Johnson Medical School (RWJMS) in New Brunswick and New Jersey Medical School (NJMS) in Newark to start exploring what is needed to unify these colleges under a single mission and governance structure with one educational system, research agenda and clinical practice.

Rutgers Biomedical and Health Sciences Chancellor Brian Strom, who oversees both medical schools, made a case for the merger in a Jan. 31 letter to the executive committee of the senate, a legislative body with some regulatory functions. Strom said a combined school would increase Rutgers’ access to research dollars and provide new opportunities for students, scientists and patients. Faculty and students at the two schools treat patients at teaching hospitals, clinics and private offices in both cities.

“I believe we have the opportunity to pursue a bold and transformational change in medical education at Rutgers University that may prove to be an influential model across the United States,” the RBHS chancellor wrote. He also stressed that if the schools were combined, one campus would not be a satellite or subordinate of the other.

In his letter, Strom underscored that no final decision has been made, but he asked for the senate’s input before faculty committees are appointed to dig into the mechanics of a merger; it is not clear how long the senate executive committee will take to make a decision. His letter does float a possible name for the combined entity — “Rutgers Medical School” — and hints that it could attract a “transformational philanthropic gift.”

If the Senate panel does give its go-ahead, and the faculty can find a way to make it work, the final decision would essentially be left to the Liaison Committee on Medical Education (LCME), a national committee that accredits medical schools, according to the letter. Strom’s team has already been in touch with the liaison committee about the potential change, which could result in the largest medical school in the U.S. (Each program now includes more than 700 students and thousands of faculty and staff.)

“Thus, my request to the Senate is to approve the merger now, with the explicit recognition that we are continuing a process where the end result may be the integration of RWJMS and NJMS into a single accredited school, the final arbiter of course being the LCME. However, an irrevocable decision to merge has not yet been made, pending that work by the faculty,” he wrote.